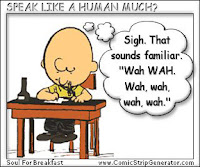 An Expert View:
Speak Like A Human At Work

Ever find yourself or others
speaking "professionalese" at work?
Speaking like a human may get better results.

I'll start by saying, "Guilty as charged." Put me on the phone with someone from the South for any length of time, and at least one word I say later will make me sound like I was born and raised in Louisiana. International conversations? You don't want to know. It's natural for us to start to sound a little like the people we talk with on a regular basis.

We all grow up hearing phrases that become part of our language as adults. Our language also develops through our friendships and acquaintances. It's one of the ways we connect with others, by bonding over common language. At work, we adopt a unique "workplace" language too as we communicate with co-workers. Sometimes this happens without us even being conscious of it. It's like having a southern accent after a telephone conversation, and wondering where it came from.

I remember sitting in an executive meeting one day with a new leader who had just joined the company. It was clear that he had no idea what we were talking about. We may as well have been speaking a foreign language. It was our own version of what author Daniel Pink refers to as "professionalese." Instead of saying, "This isn't working" we'd say things like, "We may need to optimize our results by adjusting our strategy and pursuing different opportunities." To a stranger, I imagine we sounded like Charlie Brown's teacher: "Wah, WAH. Wah, wah, wah, wah."  Worse yet, I'm absolutely certain that's what we sounded like to employees and customers.

In this week's Expert View, I share an article in which Daniel challenges us to "speak like a human at work", just for seven days, to see what happens. It's essentially a challenge to keep it real in discussions with co-workers and clients alike. Just so I'm clear, this is not exclusively a leadership issue. This problem exists at all levels of any given organization. I share this challenge with you, because I think it's an excellent way for all of us to practice being authentic to who we are in the workplace... and avoid eating our souls for breakfast.

Read more. Let's see if you're up for the challenge.


My Challenge To You:
Only Speak Like A Human At Work (An excerpt from Daniel Pink's article in The Telegraph, 2010.)

"One night last month, an <airline> flight left Heathrow Airport bound for Newark, New Jersey. As the plane neared the Eastern Seaboard, bad weather forced the flight to divert to Hartford, Connecticut, some 106 miles north of its destination. The plane sat on the runway there for four hours – without air-conditioning, food or water – as babies wailed and adults anguished in the darkened cabin.

The next day, the airline, which explained that the Hartford airport lacked the customs personnel to process an international flight, offered this response: “<Airline> would like to thank passengers for their patience and apologize for any inconvenience caused.”

Jason Fried, co-author of ReWork: Change the Way You Work Forever, finds the language of that statement almost as inhuman as the problem that prompted it.

Not too long ago, Fried saw a similar, though less calamitous, disaster in a Chicago cafe. A woman had just purchased a large cup of coffee. On the way to sit down, she tripped, and spilled the entire contents all over another customer.

“If someone is really, truly sorry,” says Fried, “that’s how they respond.”

But in business we rarely talk like that. Instead, we resort to a weird and inadvertent bilingualism. We speak human at home and “professionalese” at work. And that might be hurting our businesses (LL: and ourselves) more than we realize.

Go back to that all-too-common phrase: “We apologize for any inconvenience this might have caused.” Would you say that to your daughter when you were late picking her up from soccer practice? To your neighbor when your dog trampled his flowerbed?

“Any inconvenience” is emotionally anemic and lacks the specificity to make it meaningful. “We apologize” isn’t much better. It’s distancing almost to the point of dismissiveness. “When you say, ‘I’m sorry,’ you’re owning,” Fried explains. “When you say ‘I apologize,’ you’re renting.”

Professionalese is a renter’s language. It doesn’t expect to be around for very long and has no stake in the long-term prospects of the neighborhood. It says, “mistakes were made” rather than “we messed up” and claims to “take responsibility” instead of acknowledging “it’s my fault”.

Like any valuable relationship, the ones we have in business hinge on trust. And trust depends on openness, respect and humanity. Yet we often resist taking that approach in our professional lives, even though we know it would be absurd to do anything else in our personal lives.

For instance, suppose I’m talking on my mobile phone – maybe doing an interview for this column – when my wife calls. I can’t speak with her at the moment – I’m on deadline – so I say to her: “All of my brain is busy right now, so please hold and I’ll be with you shortly. Your call is very important to me.”

I guarantee that my customer satisfaction scores at home would suffer.

But if that’s true, why not re-craft the waiting message in our call centers so that it’s more like what we’d say to our spouses? “We know it’s frustrating to wait on hold – but we’re swamped right now answering other calls. We’ll get to you as soon as we can – probably about [insert an accurate number] minutes. We’re sorry for making you wait.”

In a world awash in information and choices, clarity is now a source of competitive advantage, says Fried. “The real winners in business are going to be the clear companies. Clarity is what everybody really wants and appreciates.”

So try an experiment. For the next seven days, go monolingual and speak only human at work. Don’t say anything to your boss, your staff, your teammate, your supplier or your customer that you wouldn’t say to your spouse or your friend.

It might startle people at first. But I suspect that they’ll reply in the same vernacular – and you might start actually understanding each other and getting something done.

However, if I’m mistaken – and this test flops – I apologize in advance for any inconvenience caused."

In today's expert opinion, Daniel Pink challenges us to get real in business. Can we speak to our colleagues and clients as human beings, in plain language and with honest emotion? He suggests less posturing and positioning. He suggests more respectful and real dialog.

We could take the easy way out and say that we simply follow our leader's example in the workplace. If he or she speaks professionalese, so do we. That's not keeping it real. Every person helps to set the tone for how conversations develop in an organization. We can choose to speak like a human to others at work, while still being respectful of the company's general communication style.

Remember the executive meeting I mentioned earlier? At one point in our professionalese conversation, the new guy said something like, "I'm sorry to interrupt. Are you saying that it isn't working today?" Yes, that's exactly what we were saying. Sort of. We just didn't want to say it in such... real terms. If we did, we'd have to explain it and maybe even do something about it.

Imagine the power of just calling it like it is, with honesty and truth and respect for all involved. Imagine the possibilities that would open up before us if we stopped speaking professionalese and started a real dialog in the workplace. I believe it could be profound. The best part? It all starts with one person, who influences another person, and so on.

I'm with Daniel on this one. I encourage you to take the 7 day challenge. I'll take it with you. Let's make a concerted effort to use real words, that have real meaning, and respect the intelligence of the people we talk with on a regular basis. Let's speak clearly, tell the truth, acknowledge mistakes, and apologize when it's appropriate. If it doesn't work, we can easily return to our professionalese on the 8th day. Something tells me, we won't want to go back. That's what I'm hoping for anyway.

If you want to challenge your co-workers to "speak human" with you this week, click one of the buttons below to email, tweet, or post this article.

I'm a big fan of Daniel Pink's work. To learn more about him, visit him on the web at: www.danielpink.com.