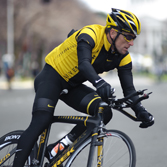 The Unraveling Of Lance Armstrong's Life:
Five Lessons We Can All Learn

It's easy to sit in harsh judgment of someone
we've admired when there's a fall from grace.
My thought?  Judge less.  Watch and learn more.

I've admired Lance Armstrong for more than a decade. Cancer survivor. Elite athlete. Livestrong humanitarian. Watching the unraveling of his life is sad for me and incredibly disappointing for others around the world.

People from all walks of life sit in harsh judgment of Lance today, whether they know him personally or know him only as a public figure. Some people passing judgment used to respect and admire Lance. Others have been waiting and wanting him to fall from grace for years.

However you feel about his admission that he used performance-enhancing drugs at the time of his astounding seven Tour de France victories - there's a lot we can learn from the choices he's made and the reality he now faces.

Many of our best life lessons come from watching the missteps of other people. You may think there's nothing you could possibly learn from the unraveling of Lance Armstrong's life. I disagree and encourage you to read this article. For just a few minutes, set aside whatever judgments you've made. Lance may have made his mistakes in an epic and highly publicized way, but his mistakes are more common than you'd think. We can all learn from his experience and avoid making the same types of mistakes in our own lives.

What can we learn from the unraveling of Lance Armstrong's life?


Five Lessons We Can All Learn

Luckily, when most of us make mistakes the entire world isn't watching. That doesn't make the mistakes any less significant for us, and the people around us. It just makes it easier for us to recover.  Below are the five most important lessons that I've learned from the unraveling of Lance Armstrong's life. These are mistakes I hope to avoid in my own life.

1.  Arrogance doesn't play well long-term.  Beware of your own hype.

When we're at the top of our game, we feel great, and with good reason. We're performing. We're succeeding. We're winning. Celebrating our successes, and gaining confidence as a result, is totally natural. But there's a line between confidence and arrogance that's easily crossed, sometimes without us even realizing it. A subtle distinction? Not really.

Confidence:  Self-assured belief in your value, skills, contributions, and potential.

Arrogance:   Self-important belief in your superiority, often offensive and overbearing.

Arrogance helps people get attention and get ahead early in their climb to success. It can be mesmerizing when we first see it in others. Here's the problem: Arrogance doesn't play well long-term. We start to resent the posture of superiority over time. We start looking for points of failure to prove it's unfounded. We want to see arrogant people fall from grace.


The Lesson:  Arrogance doesn't play well long-term. Beware of your own hype. Be great, by all means. Just don't cross the line to superiority, and the belief that you're better than the people who are riding beside you.


2.  Winning "at all costs" leads to loss.  Push for the win, but be worthy of the victory.

We all like to win. It's natural for us to want to do well at whatever we choose to pursue. The more we win, the more we want to win. In life and in the workplace, the stakes are high. Life isn't like a kid's soccer tournament, where everyone gets the trophy. Top performers get ahead, make more money, and earn more respect (in most cases.)

Wanting to win and perform at the top of our game is productive. Wanting to win at all costs? Less productive. We lose focus on the means to the end. It's just as much about the "how" as it is about the "what" when all is said and done. Misbehavior isn't always evident at the time, but it almost always comes to light eventually. There's a right way to do things and a wrong way to do things. We know the difference, even if we chose to ignore it in the moment.


The Lesson:  Winning at all costs leads to loss at some point. Push for the win, but be worthy of the victory. Don't ignore the whisper of your integrity when it tells you that you're winning the victory, but losing yourself.


3.  Deceit is treacherous territory. Only take the offensive when you're on solid ground.

In life and in the workplace, we sometimes face challenges that put us on the defensive. Other times, we find ourselves assuming an offensive stance. Our best bet is going with the flow, but sometimes we have to step into the fray. The hardest part, of course, is in knowing our best approach in any given situation.

Defending ourselves against untrue allegations is a no-brainer. Taking proactive steps to address inequality, injustice or bullying are also no-brainers. Taking either a defensive or offensive posture when you have no grounds to do so - no truth to stand on? It won't turn out well. We've all been there in ways large and small. We've tried to state something or stand for something that doesn't hold up under scrutiny. It's hard to give up once you start, because your integrity is being called into play. It never seems like a big deal at first. It becomes a big deal over time.


The Lesson:  Deceit is treacherous territory. Only take the offensive when you're on solid ground. Untruths that sneak up on you and grow over time are bad enough. Intentional deceit? Deadly. Avoid it at all costs and certainly stop it before it becomes a runaway train.

4.  It's harder to recover with grace over time.  Admit mistakes early and selectively.

Mistakes come in all shapes and sizes. The small ones, we get over quickly. The big ones, we don't easily forget. Sometimes the consequences are insignificant. Other times, the consequences change the course of our lives (or the lives of others) forever. It's impossible to go through life without making mistakes. We just hope to make the kind we can recover from with grace.

In the category of "not rocket science" - we all know we should take responsibility when we make a mistake. It's the only way to recover with grace. But when the stakes are high, and we risk losing something we value, it's harder to take responsibility.

We may try to deflect, redirect, or otherwise avoid having to admit we've made a mistake. If we do this long enough, we start to believe our actions are okay. "Everyone is doing it" or "No one will be hurt by this" becomes a blanket to keep us warm when the chill of exposure rears its ugly head. If there's anything we've learned from Lance, it's that a mistake repeated and defended over time is impossible to recover from gracefully. It also becomes impossible to apologize only to the select group of people who were directly impacted.


The Lesson:  It's harder to recover with grace over time. Admit mistakes early and selectively. Refusing to accept responsibility for a mistake adds weight to the consequence and expands the sphere of influence.  The longer it lingers, the bigger the fall-out.

5.  Stories take root in our minds over time.  Be honest with yourself if no one else.

Our lives unfold as a series of stories that we tell ourselves. We live our lives day-to-day informed by our stories. At the core are stories about what we deserve and how others judge us, as well as stories about the things that are unfair, limiting or disappointing about our lives. We can get so caught up in our stories that we miss very real opportunities to be good, do good, or feel good.

Whether we limit ourselves because we feel we're inferior or we live above the rules because we believe we're invincible... our stories hurt us. Being self-aware allows us to be honest with ourselves about what we're doing that's good and fuels our best potential, and what we're doing that's destructive and damaging to our future. We all do both of these things at various times in our lives. We just don't know it or acknowledge it if we're telling ourselves stories that make it okay.


The Lesson:  Stories take root in our minds over time. Be honest with yourself if no one else. It isn't healthy to believe your own stories when you know you're living a lie.

I'm not here to pass judgment on Lance Armstrong. I'd much rather learn from his mistakes. He's made choices that have hurt not only himself, but his family, his friends, his colleagues, and millions of other people around the world. There are a lot of people who are celebrating the demise of Lance, the athlete and the man. There are others who are crushed by his revelations. I personally find it all a little tragic, in both how it started and how it ended with his admissions of the past week.  If I don't learn from what he's experienced, it's all the more tragic.

Here's what I've learned and hope to avoid repeating in my own life.

- I want to be confident, but never arrogant. People will support my success.
- I want to win, but also be worthy. Victory by any means isn't the path I choose.
- I want to avoid untruths. It's not about perfection. It can't be. It's about intention.
- I want to take responsibility for my mistakes. Recovering with grace matters to me.
- I want to be honest with myself before all others. Stories just don't serve me well.

Hero or Villain. Star Athlete or Impostor. Real or Phony. These aren't choices I want to make. I just want to learn from Lance Armstrong's mistakes to live a better life for myself. I wish the same for you... and for him.

PS:  If this information was helpful to you, it may be helpful to your friends and colleagues too.  Please spread the word and pass it along, by clicking one of the buttons below to email, tweet, or post this article.

Get Updates From Me: