How You React At Work 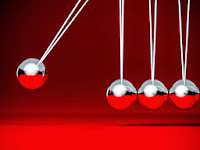 How You React To
Other People's "Stuff" At Work ...
Is More Important Than You Think

We continuously react and respond to people around us in the workplace. Sometimes the interactions are positive and productive. Other times - without even realizing it - we react to people in ways that are at best non-productive, and at worst damaging to our success.

Remember Newton's three laws of motion? Every object moves in a straight line unless acted upon by a force. The acceleration of an object is directly proportional to the force exerted. For every action, there is an equal and opposite reaction.

Your world at work may not seem as simple as this science, but the general theory applies. On a typical day, you do your work and mind your own business until someone says something, does something, or causes something to happen. Without fail, you react to some degree. You respond favorably to your smart and likable co-workers. You probably react a little less favorably to others.

The tricky part is that you probably "react" more than you think, even if it isn't obvious.

The more aware you become of your natural and subtle reactions toward others, the better you'll perform and the more favorably you'll be perceived. People tend to think that success is about big and obvious factors. I'm here to tell you that the more subtle way you handle yourself at work matters. A lot.

Want to perform better and feel better at work? Watch out for these three common reactions.

Equal and Opposite Reactions

Almost everyone we meet at work inspires a natural and instinctive reaction in us. Sometimes our reaction is positive. Other times, our reaction is one of quiet conflict. We don't like someone. We don't think they respect us or support us. We don't believe they're smart enough or <whatever> enough for their role. Our reaction doesn't always lead to direct conflict with the other person, but it does lead to internal conflict that plays out in ways we may not intend.

Here's how to get in front of three common reactions we have to others at work.

When we disagree with someone we like and respect, we usually deal with the difference of opinion quickly and easily. We either come to a compromise, or we agree to disagree and move on. With other people, it can be a bit more challenging.

It's easy to get caught up in trying to "prove" we're right. Here's what typically happens. We spend time stewing about the situation. We talk to our co-workers about it. We create arguments in our minds, or in our email, to make our point. We start looking for proof in obvious or abstract ways to show without a doubt that we're right.

We're frustrated. Our attitude changes. Our perspective gets clouded. If we win, it feels like a battle. If we lose, it feels like a war. We can waste a lot of time and energy before another situation distracts us. We can also leave some trash on the trail when our emotions run hot.

Does it matter in any significant way if you're right in a particular situation? Would you care about being right if your disagreement was with someone you liked or respected? If you didn't say a word about your difference of opinion to anyone else, what horrible thing would happen? Why is it so important that you're right in the circumstance?

If it's a matter of ego, pride, or irritation, let it go. State your opinion, acknowledge the disagreement, and move on. Feel sorry for the other person's ignorance if that helps. :-)

When the stakes are high, make your case. Do it quickly, directly, and be prepared to accept the outcome. If you can't live with the outcome, escalate to someone who's in a position to step in and make the final call. Then get over "right vs. wrong" and live with the decision. To do otherwise is just an exercise in frustration, for you and everyone else involved.


2.  It isn't fair and everyone should know it.

When something happens at work that doesn't seem fair, we take it personally. We feel justified in standing up to the person who committed the offense, because we have truth and justice on our side. Often, we don't feel comfortable confronting the person directly, though, so we talk to others and tell ourselves that we're just validating our perspective about the fairness of the situation.

Did the unfair thing happen to you directly? Have you talked to the person who was unfair  - to ask for more information or for a different outcome? Are you taking things more personally than they're intended because you don't like a decision, change, or action? Do you feel the need to defend someone else who was treated unfairly? Is that appropriate for your role?

If you've been treated unfairly, definitely address it, but only with the people directly involved. Stick to the facts and try to remain non-emotional in your discussions. If an issue of fairness doesn't impact you directly, show support for those impacted by listening or giving advice... and leave it there.

The more you talk to others about something that doesn't involve you or them, the more disruptive it becomes to your productivity, your attitude, your job satisfaction, and your reputation. It can become all-consuming, and there is zero point beyond perpetuating the concept that life should be fair. It isn't.

Know this:  people who routinely do bad things don't really need your help being exposed. This is particularly true for people who are unfair. They'll show their true colors to others over time. It's not your job to expose them, and it almost always hurts you in the process when you try.


3.  You did something and I want you to learn your lesson.

It's pretty common for us to want others to learn some kind of lesson when they haven't taken our advice or they've wronged us in some way. It's not like we want some dire consequence. We just want a little recognition that the other person should've valued us enough to involve us, listen to us, or agree with us.

Every minute we spend trying to help someone else learn a lesson (or trying to get even) takes away from whatever it is we're supposed to be doing. Not only that, we hardly ever get what we really want. The person who we want to learn a lesson, or feel some impact of their actions, probably doesn't care. Seth Godin once wrote that the person who most needs to learn a lesson hasn't, and won't. What you're doing when you spend time here is diverting yourself from your own path and ruining your day in the process.

Can you share your perspective about lessons learned with the other person privately, so you're not obsessing over being right? (See #1 above.) How likely is it that the other person will acknowledge that they've learned their lesson, even if they do? Are others aware of your perspective? Won't it be obvious that a better choice could've been made, at least to the people involved, even if it isn't spoken?

It's totally natural to want others to learn a lesson when things haven't gone your way. It's just not very gratifying. It takes time, energy, and emotion to try to "right" a "wrong" or teach the big lesson that we were more important to a decision or action than someone realized. It also makes others uncomfortable if they sense that kind of activity going on, even if they agree with you.

Demonstrate your value through your words and actions. Don't worry about the choices of others. Let the lessons become apparent to others on their own. They almost always do.

The way you react to others in the workplace is more important than you think. Even if you play nice and put on a happy face, the subtle reactions you're feeling under the surface of challenging relationships impacts your success. It's completely natural to want to be right (especially when you are) or to want fairness or validation in the workplace. How you respond to these situations when they don't go your way matters.

Your best defense against getting caught up in negative reactions at work is to be aware. Catch yourself trying to prove you're right, and peel back unless the stakes are high. Address issues of fairness privately, and only when you're directly impacted. Don't hope for lessons learned when someone goes against your preference. These things sort themselves out over time in almost every environment.

If you're in a situation where these challenges happen often and no one is willing to address repeated offenses related to poor decision-making, fairness, and achieving good outcomes ... you may need to consider a change. If you find yourself reacting to people at work with a feeling of having to prove yourself or fight for what's right over and over again, you're likely working for a company that isn't a good fit for you.

Most likely, these situations occur for you with some regularity but not in dramatic form. A small change in your behavior can make a huge difference in your productivity, performance, and satisfaction. Next time you find yourself in one of these situations, make the shift and see if you don't do better and feel better as a result.

Thanks for coming by to read this article. If it was helpful to you, share it with your co-workers, friends and family members by clicking one of the buttons below!

Get Updates From Me: