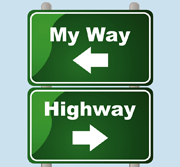 Why Sometimes Being Right
Doesn't Go Your Way

When we're right, it seems obvious that others should agree.
Unfortunately, that isn't always the case.
Why isn't being right enough?
And what can we do about it?

I love being right. I mean, who doesn't? Like most people, I think I'm right more than I'm wrong. Of course, if we're all right more often than we're wrong, then why are so many bad decisions being made in business?

So... that doesn't sound very promising. Good news. If you're someone who's right more than you're wrong, and you want your voice to be heard, there's hope. Hope comes in the form of a structured presentation of your "right" idea - but only after you've done the work to know it's right.

Have you ever felt the "fight or flight" response kick in during work discussions? Have you found yourself presenting an idea that's so obviously right you can't believe anyone disagrees? Have you ever found yourself arguing over something that you suddenly realize you don't even care about - but you're deep in disagreement with someone else? If you answered yes to any of those questions, this article is worth your time.

Your Brain Is Hooked On Being Right

Judith Glaser is the CEO of a consulting firm and author of six books, one of which is about conversational intelligence in the workplace. She published an article recently about how our brains are hooked on being right. Take a look at an excerpt of what she has to say:

"I'm sure it's happened to you: You're in a tense team meeting trying to defend your position on a big project and start to feel yourself losing ground. Your voice gets louder. You talk over one of your colleagues and correct his point of view. He pushes back, so you go into overdrive to convince everyone you're right. It feels like an out of body experience — and in many ways it is. In terms of its neurochemistry, your brain has been hijacked.

In situations of high stress, fear or distrust, the hormone and neurotransmitter cortisol floods the brain. Executive functions that help us with advanced thought processes like strategy, trust building, and compassion shut down. And the amygdala, our instinctive brain, takes over. The body makes a chemical choice about how best to protect itself — in this case from the loss of power associated with being wrong — and as a result is unable to regulate its emotions or handle the gaps between expectations and reality. So we default to one of four responses:
All are harmful because they prevent the honest and productive sharing of information and opinion. I can tell you that the fight response is by far the most damaging to work relationships. It is also, unfortunately, the most common.

That's partly due to another neurochemical process. When you argue and win, your brain floods with different hormones: adrenaline and dopamine, which makes you feel good, dominant, even invincible. It's the feeling any of us would want to replicate. So the next time we're in a tense situation, we fight again. We get addicted to being right."

Whether you can relate to this scenario personally or not, you'll encounter these responses in others. If you take a look at your own reactions, you'll likely see yourself in one or more of the common behaviors described above, at least on occasion.

You can't win every argument, or have things go your way every time, even if you're right. But you can potentially increase your odds with a few adjustments in your approach given this new insight.

How To Be Right... And Be Heard

It's easy to get caught up in knowing you're right without considering for a moment whether you really are right. It's equally easy to be right, and not be able to convince others to see your point of view. Here are a few tips that may help you on both fronts.

Sometimes you have the ability to think through your position on a particular issue in advance. Other times you have to respond to something real time in a discussion with others. Either way, you can do a quick assessment of your "right-ness" to be sure you have something meaningful to say.  Here's how.

Be Clear Before You Speak.

Start by being clear on your position or opinion. If you can't express it in two sentences, you're probably not clear. You can't be perceived as right until you're clear. If you need to ask for more time to formulate an opinion, do it. Don't meander your way to an opinion in discussions. You'll be bull-dozed or considered irrelevant.

Know Why It Matters.

If you can't articulate why your suggestion, decision, choice, or opinion matters, why should anyone listen to you? Test your right-ness by being sure you can explain why it matters one way or the other what you think. Why do you believe what you do, and why should others care?

Engage ONLY When There's An Impact.

Even if something matters on a philosophical level, it only really matters if there's a positive or negative impact to the business based on the outcome. What will happen if your position is supported? What if it isn't? If it doesn't really matter one way or the other what direction is taken (in terms of the success of the business, welfare of clients, or impact on the staff), don't engage in a battle.  It's just an exercise in ego and it's a waste of time.

It's tempting once you have the floor to share every bit of information you have. You want to be seen as smart, insightful, and analytical. You don't want to leave anything to chance. Yawn. We're all bored. Best advice I ever got when it comes to presentations:  Be bright. Be brief. Be done.  Here's one approach to best present your ideas and be heard.

State your opinion, request, decision, choice, or argument clearly. In one minute or less, state your position and why it matters.

Let the group know what you're asking of them. Are you just informing, so they can agree or endorse or offer perspective? Are you asking them to make a decision or give approval? Be clear on the reaction you want or the discussion may be a runaway train.

Present a Balanced View Of Impact.


3.  Be Prepared To Graciously Defend Your Position.

Glaser talks about the four typical responses that surface during discussions:  Fight, Flight, Freeze and Appease. You have to consciously work to avoid these responses. Shoot for a balanced presentation of what matters and why - and only when it really matters. You'll encounter people that make no sense. You'll be in situations where people lie and misrepresent. You'll be faced with illogical arguments and egos and competing priorities. Here's your best bet.

When discussions aren't going your way, go back to what you're trying to accomplish for the business. Restate the goal or objective and why your position supports it. The more closely you can relate your position to prior commitments or decisions the group has made, the better.

If something else on the table doesn't make sense, state why without being disrespectful. If you can endorse what's good about it, do it up front. Then identify what might not work about that option, and highlight how your approach addresses the concern more effectively.

Try not to be lured into a fight, by raising your voice or coming across strident in response to others. On the other hand, don't allow yourself to be over-talked or ignored either. Stay calm and ask for the opportunity to present your opinion without interruption. Then seize that opportunity and do it clearly and with confidence. The stronger your argument, the better you can defend it.

Even when you're right, you won't always be heard or be able to influence outcomes. It's important to know when to stop fighting and to align to the group's perspective. At this point, you move from wanting to be right to being as least wrong as possible. Here's what I mean.

Sometimes the way you earn the right to be heard next time is by protecting the company's interest when your opinion isn't supported this time. Don't go with Fight, Flight, Freeze or Appease. Just try to make a wrong decision less wrong, by helping the team offset any negative implications of their choice. Be productive.

If you still feel strongly about your position, and another position is supported, talk privately with your boss. Review the situation. Tell him or her that you'll absolutely support the decision or choice made, but that you want to be sure your opinion is fully understood before you get on with things. Sometimes a private discussion (without the energy of a team dynamic) can turn things around. Only do this when it really matters, because it's disruptive and can backfire if emotions run hot on an issue. Your peers won't appreciate back-channeling either, so do only when the stakes are high.

When you can't influence others, even though you're right, get on board and do your part to deliver the best possible outcome. Don't undermine, don't gossip, and don't gripe. Just make sure your position is known to those directly involved, identify ways to minimize risk and negative impacts, and get behind it. Be a gracious loser - and you may just win more often.

You may think that the most successful people in business are the fighters. But successful people who earn the most respect and sustained success aren't fighters. They know when to push and when to go with the flow. They avoid the stereotypes and navigate discussions without resorting to aggressive or passive-aggressive behaviors. How do they do it? Unlike fighters, they avoid the addiction of being right.

You don't have to be right all the time to be successful in business. You just have to be right when it matters, and in those cases, you have to have the ability to influence outcomes. It's a combination of minding your temperament and your technique. It's also about choosing your moments to lean in.

Your brain may be hooked on being right. Your success is based on being smart. Be right, by all means. Just earn the right to be heard when it really matters.