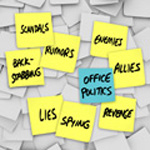 Navigating Workplace Politics
With Integrity: Can it be done?


Politics are a reality of life in business.
The point is not to avoid politics.
The point is to navigate political situations
without compromising yourself or others.


[Re-posting this article for clients and so many others who struggle with this issue daily.]

The title of this article probably made you twinge. You may have laughed or shaken your head no. You may have even added a sound of disgust for good measure. No surprise. Most people see workplace politics as bad. People who dabble in them are even worse. The thought of integrity in office politics feels like an oxymoron.

I’ve always found it interesting that as present as politics are in the workplace, no one actually claims responsibility. Not one person I know lists “political” as a key skill on their resume. And yet, politics abound. What if I said that that you actively participate in workplace politics every single day? Would you challenge me? Your immediate thought is likely “No way” with an inclination to stop reading.

Workplace politics is:
The use of power and influence to achieve things, good and bad, at work.

Most people have a negative connotation of workplace politics. We think of hidden agendas, back-stabbing, lying, cheating and other malicious efforts. The thought is that politics involves people trying to advance themselves by means other than merit and contribution. In reality, the political landscape is far more subtle and complex. It’s more than just the subset of negative issues that unfold in the shadows of the workplace. Politics is the collective use of power in an organization in the daily course of business.

Every person in every organization has a certain degree of power, influence and leverage. This is true no matter what role you play. Think of it as your personal capital. You may have power through your position, overseeing the work of others or controlling access to resources. Alternatively, you may have a sphere of personal influence within the organization. People respect and/or like you, listen to you, and are influenced by your opinions. You may also have leverage in an organization. You may be someone who has specialized expertise that makes you valuable. You’re able to use your perspective to help shape the opinions of others.

Your Role In Politics

You use personal capital, both intentionally and unintentionally, every day. It may be to build relationships with others that benefit you. It may be to convince people to agree with your position on a particular issue. It may be to influence the decisions or actions of another.

Every comment you make, every opinion you share, every action you take carries weight in an organization. Your characteristics and your behaviors are an important part of the political landscape. This is true of everyone. The collective use of power, influence, and leverage in an organization is what propels it forward to achieve and perform. Politics is simply where all of these individual perspectives and relationships intersect.

If we’re all a part of the political machine, why do we feel such disgust for workplace politics? It’s primarily for two reasons. First, we tend to focus on the more obvious and detestable demonstrations of political power - the “how can they not see what he’s doing?!?” examples. We rarely notice the more subtle daily manipulations that occur in hallway conversations and email communications. Second, it’s because in many organizations, the behaviors that are encouraged and tolerated are competitive in nature and non-productive. The idea that survival-of-the-most clever wins within an organization is ludicrous to achieving the best business result, but so common.

The CEO and senior leadership team set the tone for the culture and political play in an organization. If you approach matches their preferences, you thrive without effort. If it doesn't, you have to learn to navigate. You’re impacted by (and impacting) politics in every interaction you have at work. Politics exist in the nuance around you. That's why personal integrity becomes so important when navigating politics. You don’t jump in and out of politics. It’s all politics.

1.  Understand Power In Your Organization.

You can look at any organizational structure and easily see who’s been granted power in an organization. You have to watch and learn, though, to see who really has power in an organization. Understanding who has influence and leverage, and why, is important. Much of what drives people crazy in workplace politics is trying to understand how to get things done. If you know who’s in a position to influence outcomes, you’re more likely to get done what you need to get done. Period. You don't have to like it. You just have to understand it.

When it comes to navigating culture with integrity, this is where your choice of relationships becomes important. It’s much easier to stay true to your integrity if you aren’t aligning with others for future bargaining position. Assigning value to relationships based on what you believe they can do for you later often comes back to bite you. You have to do this to some degree, but the more you can avoid it the better.

Aligning too strongly with any one person, or group of people, can also prevent you from being successful long-term. Personal capital shifts in every organization over time. This is particularly true when changes in leadership occur or new strategies are introduced. If you can keep from positioning yourself too closely with any one group, and instead engage collaboratively across the organization, you’re less likely to become collateral damage as political shifts occur.

Understanding the level of power, influence and leverage you have in an organization can be challenging. Your power comes primarily through the role you play and the level of authority you’ve been given. Your influence and leverage are more about how you interact with others. Do people involve you in important discussions, either formally or informally? Are you often asked for your opinion? Do you generally receive positive feedback from others in the organization? Do you interact frequently with your peers? Are you known by your boss’s peers and other senior leaders?

Learning to cultivate your personal capital is about developing an ability to influence outcomes in your organization. This is what allows you to successfully navigate the political landscape. At different times of my career I’ve done this very well… and other times I’ve done this incredibly poorly. What I've learned over the years is that some things don’t really change that much from what you're taught in kindergarten.

Be nice to everyone. You never know what the future holds for any relationship. Respect others and work hard to consistently earn their respect in return. This provides greater political strength than any other single factor. Listen as much as you talk and share what you can, without breaking confidences. It makes you a tremendous political ally to others. Don’t bark or bite unless you have to, but don’t allow others to bully you. Stand up for what you believe is right. Don’t compromise your relationship with one person to improve your relationship with another. It rarely serves you well. Invest in relationships that are positive, productive, and worth sustaining. Let politics, and the politicians, shake out on their own if at all possible.

3.  Use Power Only When It Matters.

If you have power, influence or leverage in an organization, it’s tempting to use it. Often. Here’s the rub. You only have so much you can achieve in an organization. You won’t win every battle. You won’t deserve to in many cases. Be selective in using your power to drive outcomes to your favor.

Remember that there's a distinction between being right and doing right. The former doesn’t matter in the broader scheme of things and can just lead to political misbehavior. It’s hard to get behind a decision when you believe strongly in a different path, but save your power for things that matter.

Fight for opportunities to demonstrate integrity, by doing the right thing for employees, customers or shareholders. You’ll know you’re on solid ground, personally and professionally, if these are the things you stand behind. No one gets it right every time. We all pick the wrong battles at times, or fight them in ways we later regret. The trick is to learn and manage it better the next time around. Without a doubt, you’ll have the opportunity.

4.  Rely On Your Personal Compass.

The final key to navigating workplace politics with integrity is to be thoughtful about what integrity means to you.  It’s so easy to get caught up in the negative channels of politics, from relatively harmless office gossip to more aggressive forms of sabotage.

Carly Fiorina, former CEO of HP, spoke at a conference I attended a few years ago. She talked about a personal compass she used throughout her career. When faced with difficult decisions or alternative paths, she asked herself three questions:

The power that comes from your answer to these questions will serve you really well. I have a personal compass and use it frequently in my personal and professional life. I even have a physical compass on my desk as a reminder. Whatever mechanism you use, it’s important for you to know what matters most to you. Find a way to challenge yourself when you feel caught up in a political situation at work. If you know what matters, you’ll fight for the right things in the right way. You’ll be surprised how often you win political victories using a moral compass as your guide.

Workplace politics can involve power struggles, internal conflict, and polarizing manipulation. Politics can also involve collaboration, adaptation, and respectful navigation. Some argue that all that matters in the end is whether the right thing is done for the business.  Others argue that the means to the end… also matters in the end.  No one can make that decision for you. Can you navigate workplace politics with integrity? My answer is yes. What’s yours?

PS:  If this article was interesting or helpful to you, I'd appreciate you passing it along. The buttons below make it easy to share this with friends, family, and colleagues via email, Facebook, Twitter, or Google+.  Thanks so much for sharing!